The combined bands in rehearsal at Camp Asaka. Photo by SFC Sam Kaestner

The next task was to get the two soloists we brought with us comfortable. Sgt. 1st Class John Castleman and Staff Sgt. Alexis Cole on trumpet and jazz vocal respectively. John’s feature was a new arrangement of Caravan, arranged by West Point’s own Sgt. 1st Class Mike Reifenberg. If you’ve never heard him, John is without question one of the finest jazz lead trumpet players anywhere. He is totally devoted to his craft as a musician. In fact, when he has multiple days off of the trumpet in a row, we often kid that he is going into trumpet withdrawal and beginning to twitch.

The arrangement of Caravan began with a free trumpet, vocal, and English horn obligato, played by one of the Central Band’s musicians in training. John thought it odd that he and Alexis should be the only ones to stand at the beginning, even though all three parts have equal importance. The Central Band’s English horn player was invited to stand with the musicians from West Point and it clearly had a profound impact on him. Lt. Col. Keene encouraged the young English horn player to come out of his shell and really open up musically. It made for a touching moment of international cooperation on stage, and injected a bit of American bravado into the Japanese English horn player.

When it was time for John to take his solo in Caravan, I knew the Japanese musicians would be impressed, and they were. John soared into the stratosphere of the trumpet range and eyebrows went up all over the room. At West Point, we sometimes forget what an amazing talent John is because we work with him every day. We know him as a person, a family man, and a colleague. The Japanese musicians had just met him, and all they knew was his playing. They were very impressed, clapping for him after he finished in rehearsal.

Next we rehearsed Fly Me to the Moon, featuring Staff Sgt. Alexis Cole. Alexis is a singular vocal talent, and also spent about 18 months living in Tokyo before joining the Army. At West Point, we often play jazz tunes in a concert band setting, and it usually works really well, so we forget that it is a real challenge to pull off. The combined band had a few hiccups as things got going, struggling to align the rhythm section and balance the bass and piano with the larger ensemble. Once we got everything sorted out, Alexis was able to shine. She really dazzled the musicians, most of whom had never been exposed to such great jazz singing up close and personal.

The rehearsal was incredibly productive. No matter the language barrier, it’s always easy to make music with other great musicians, because music is absolutely a universal language. Following the rehearsal, we shared a truly amazing sushi dinner with Central Band members, sitting on tatami mats, eating off of traditional low tables. It was truly a memorable day. 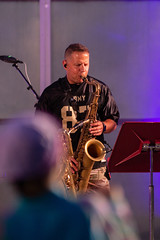