We arrived at the Central Band’s headquarters and were greeted by perhaps 100 of their musicians and officers. It was a warm welcome indeed. We were then whisked off to warm up rooms set aside for each section. In the Central Band, each section has their own room for warming up, practicing, sectionals, or whatever else they need to do musically. Some large sections, like the clarinets actually have three rooms. Of course, they have 21 clarinets instead of our six.

One of the clarinet section rooms at the Central Band.

We began rehearsal with a welcoming surprise for Lt. Col. Keene. Knowing he is from New Mexico, the Central Band passed out Sousa’s New Mexico March Lt. Col. Keene was told he would rehearse the Star Spangled Banner first, so he gave a sweeping, regal upbeat only to have the band start with a bright, upbeat march. The look on his face went from disbelief to surprise to a deep smile as he realized he had been had.

Finally, we got down to the more serious business of rehearsing for Saturday’s concert. When we finally began playing a bit, I quickly realized that the Central band was good. Like, really good. Their musicians come from a much wider range of backgrounds than do ours. Some of their musicians come into the JGSDF right after high school, while others have gone to music school. Each member of the West Point Band has attended music school and most have master of music degrees; a few even have doctoral degrees. No matter how they arrived at the Central Band, the musicians were excellent, and excellent in unexpected ways. The clarinets for example, had unbelievably fast articulation. So fast, that at times, I could not keep up!

The clarinet section in action in rehearsal.

After actually rehearsing our national anthem, Lt. Col Keene conducted Frank Tichelli’s arrangement of Shenandoah, a solemn and moving version of one of the most iconic of all American traditional songs. The Central Band musicians hung on every twitch of the baton, and responded beautify. We went through the piece from start to finish without stopping to fix anything. There was electricity in that rehearsal room, unquestionably. The concert was going to be good.

A particularly exciting moment for me, was hearing the Central Band play The Official West Point March, conducted by their conductor, Col. Takeda. We know “The Official” as we call it, inside and out, and it is always interesting to hear another take on the march. The Central Band played the march well, albeit a bit faster than we usually play it.

Check back in a few days for more on the rehearsals with the Central Band at Camp Asaka in Tokyo.

Our first morning in Japan began with a trip to the Japanese Ministry of Defense, essentially the Japanese pentagon. We were all deeply honored to merely be allowed on the grounds of the Ministry of Defense. During the morning, we had the chance to see the retirement ceremony for Itsunori Onodera, the Japanese Minister of Defense. The ceremony had perhaps 300 honor guard Soldiers and a detachment from the Central Band of 50 or so. The alignment and attention to detail of the honor guard was astounding. All of the Soldiers are nearly all the same height and weight, making for a level of similarity that is nearly impossible in our Army.

The band performed several ceremonial tunes, some familiar to me, some new. We spent some time discussing the finer points of military ceremonies, both American and Japanese, with the commander of the Central Band, Col. Takeda, after the ceremony. Overall, the ceremony was highly polished and professional. As a Soldier who performs ceremonies for a living, I found it fascinating to see how another nation carries out military pomp and circumstance.

After the ceremony, we had the chance to meet briefly with Major General Kiyota, who had been instrumental in bringing musicians from West Point to Tokyo. Lt. Col. Keene presented Maj. Gen. Kiyota with one of the newly minted West Point Band coins in recognition of his support in making the mission a success. 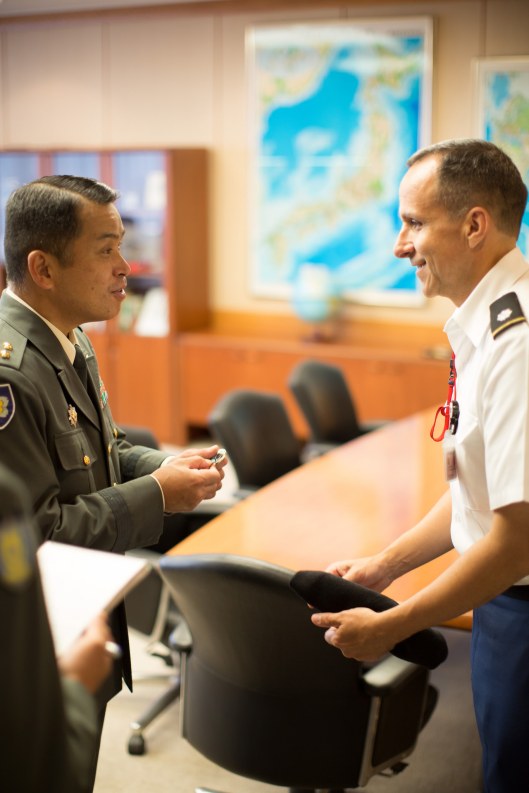 We finished our morning with an early lunch on the top floor of the Ministry of Defense. The lunch was simply the finest food I have ever been served at any government establishment, and the view was pretty nice too. After lunch it was off to rehearsal with the Central Band for the first time. 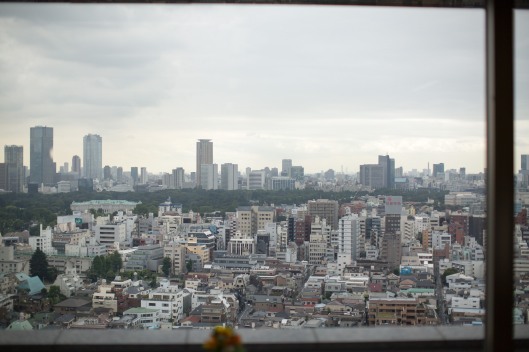 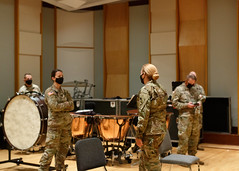