Each year the West Point Band is proud to provide musical support for the Ellis Island Medal of Honor ceremony. Sponsored by the National Ethnic Coalition Organization, these awards are presented annually to American citizens who have distinguished themselves within their own ethnic groups while exemplifying the values of the American way of life. Past Medalists include six U.S. Presidents; one foreign President; Nobel Prize winners and leaders of industry, education, the arts, sports and government; and everyday Americans who have made freedom, liberty, and compassion a part of their life’s work.

This year marks a special significance for the West Point Band, as we will honor one of our former members, Deric Milligan, who will receive the Ellis Island Medal of Honor at this year’s ceremony on May 9 at Ellis Island.

During his time in the band, Deric served as a Hellcat bugler, sounding Taps at hundreds of military funerals and performing in a multitude of concerts. In addition to his ceremonial duties, he led the Army football production staff. However, it is Deric’s dedication and talent in another area that earns him this distinguished award. This weekend he will be recognized as co-founder and Executive Director of Inheritance of Hope, a nonprofit charity dedicated to serve families with terminally ill parents.

Midway through Deric’s tenure with the band, his life took a turn when his wife Kristen was diagnosed with a rare terminal liver cancer in 2003. After several years of coping with the challenges of raising their three young children while battling a terminal illness, he and Kristen founded Inheritance of Hope together, with the mission to inspire hope in young families who are facing the loss of a parent. The charity achieves its mission by providing life-changing Legacy Retreats, Legacy Scholarships, outstanding resources, and individual and group ongoing support – spiritually, emotionally, and financially.

Kristen lost her courageous bout with cancer in 2012, but her legacy lives on through Inheritance of Hope. “Our goal is to provide families with an experience that they will remember forever,” said Deric. “Seeing the direct impact of Inheritance of Hope on me and my children in the wake of losing Kristen has been very affirming. I can clearly see the importance of the work we’re doing on a daily basis.”

Deric Milligan and his wife, Kristen, taken when he was in the Hellcats.

Former West Point Band trumpeter Eric Miller serves as Director of Marketing and Communications for Inheritance of Hope. A long-time family friend of Deric Milligan, Eric was invested early on in the organization, doing graphic design work and other marketing projects as needed. When Eric left the band in 2014, Deric made him a full-time job offer he couldn’t refuse, and Eric has enjoyed working for Inheritance of Hope ever since.

“It’s due to Deric’s leadership that Inheritance of Hope has become a thought leader in equipping families with the tools to thrive despite the grim circumstances surrounding terminal illness,” says Eric. “It’s been an absolute honor to not only work with Deric and the passionate team he has assembled; it’s also such a blessing to work for an organization that is truly making a difference in families across the country. The impact is profound – thanks to Deric and Kristen’s vision.”

For more information, go to www.inheritanceofhope.org and to watch the video, Kristen Milligan’s Legacy-Our Story in 4 Minutes, click here. 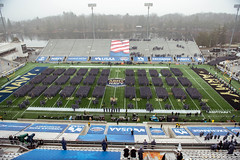