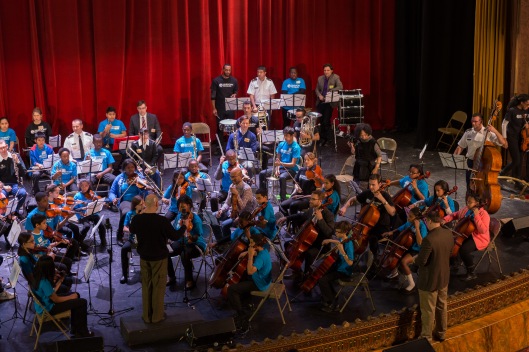 Members of the West Point Band performing with members of the NY Philharmonic and students from the Harmony Program.

On Saturday, January 31, members of the band, myself included, had a chance to work with students from the Harmony Program at the United Palace of Cultural Arts in Harlem. The Harmony Program is a nonprofit organization that brings intensive after-school music programs to communities with limited access to instrumental music education. It is closely modeled after the wildly successful, El Sistema in Venezuela. This day of education and performances was made even more special by the involvement of members of the New York Philharmonic. 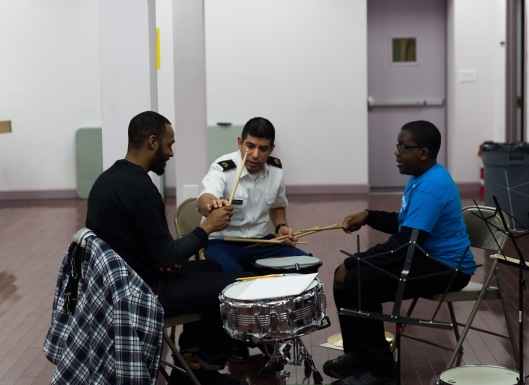 The students we worked with were from all over New York City, some from Harlem, some from Queens, and still others from Brooklyn. As is common in New York City, they represented a huge range of ethnicities and cultures. They had been working with their regular Harmony Program teachers on the music we performed together for several weeks before we worked together. When we arrived, the students were already in a massed wind and brass sectional led by one of the NY Philharmonic’s resident conductors, Michael Adelson.

After their massed sectional, each band member on site took their respective sections to work with them in a more personal setting. I spent an hour or so coaching six clarinetists from all over the city. We spent time working of course, on the music, but also on the fundamentals that are so vital in playing a musical instrument at a high level. The students were curious and attentive. I thoroughly enjoyed working with them.

Normally, a mass sectional and an individual instrument sectional would be quite a lot for a day, especially when you add a concert at the end of the day for the kids. The Harmony Program wanted the students to have exposure to the very best coaches available, so they arranged to have members of the NY Philharmonic give masterclasses during the day as well. 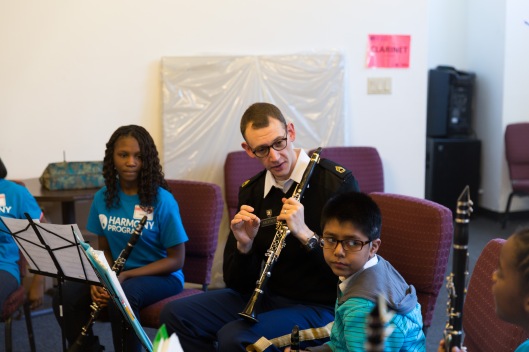 The coach for the clarinets was Alcides Rodriguez. He is currently serving as the bass clarinetist in the philharmonic. Among all of the coaches in Harlem that day, Alcides has the unique experience of being a former student of el Sistema in Venezuela. He came to the U.S. in 1999 with only a clarinet and a suitcase, and not knowing how to speak English. Alcides was tough with the kids in a way that they may not have been accustomed to. He knew that they were capable of more; more attention, more sound, more expression, better intonation, and he refused to settle for anything other than their best. The students responded well once they understood that he meant business.

Following the coaching, there was a brief rehearsal on the stage with the full orchestra, followed by a concert for the massed friends, family, and general public that had come to hear the product of so much work. The repertoire for the day was Jean Sibelius’ Finlandia and the fourth movement of Johannes Brahms’ Symphony Number 1. It’s tough to know what a group of middle school age kids are going to think of music by Brahms and Sibelius. It’s easy to think that this music is so far removed from today’s culture, that there is no way these kids will ever connect with this music. Seeing the look of accomplishment on the faces of the kids after the concert makes you rethink the notion that classical music has no place in today’s culture. It was inspiring to work with these kids, and we look forward to many more collaborations in the future.